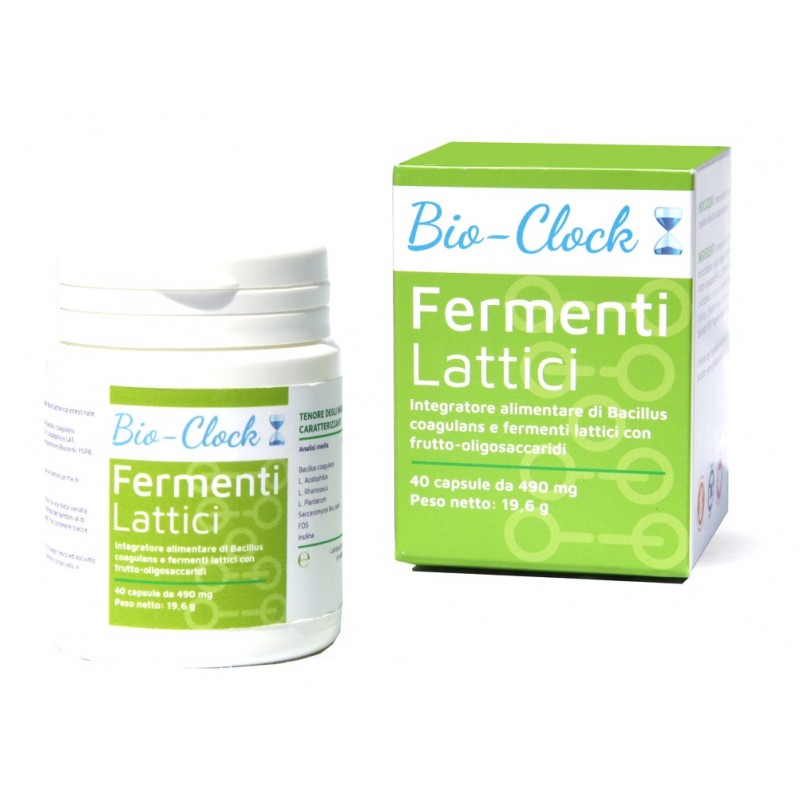 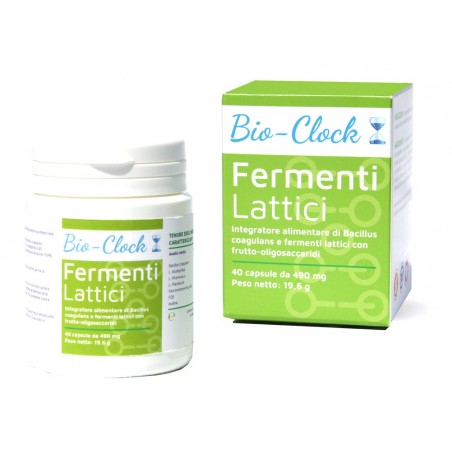 Food supplement of Bacillus coagulans and lactic ferments with fruit-oligosaccharides

Food supplement of Bacillus coagulans and lactic ferments with fruit-oligosaccharides

METHOD OF USE: it is recommended to take 1-2 capsules in the morning before breakfast.

WARNINGS: supplements should not be considered as a substitute for a varied, balanced diet and a healthy lifestyle. Keep out of the reach of children under 3 years of age. Do not exceed the recommended daily dose. It may contain traces of milk and derivatives.

STORAGE PROCEDURE: store the product in a cool, dry place.
The expiration date refers to the product properly stored in the integrity pack.

PROPERTIES AND USES INDICATIONS - A healthy colon should contain at least 85% lactobacilli and 15% of coliform bacteria. Most individuals do not benefit from this balance, being more predisposed to meteorism, intestinal toxicity, constipation, and bad nutrition absorption. Lactobacilli, by partially demolishing proteins, reduce the effect of putrefactory processes in the intestine, and defend the host organism from pathogen attacks, among the factors responsible for disease and aging.
Selected crops of lactic bacteria (rhamnosus, reuteri, etc.), presented in lyophilized forms, consist of strains specially selected according to a set of technological features, reproduced under appropriate conditions and prepared for industrial use.

Inulin - FOS: Chicory root fruttoligosaccharides, chains of glucose molecules linked to each other, are considered as a dietary fiber soluble. The main function of FOS is to feed probiotic microflora, resisting digestive enzymes.
Although FOSs are present in the daily diet, one person should eat 13 bananas, 11 onions, 16 tomatoes or 430 garlic cloves to get one gram of FOS.
The bacterial strains used are today considered to be the most important in defending the organism from pathogens responsible for many diseases and to maintain natural intestinal well-being.

BACILLUS COAGULANS or improperly SPOROGENES is a lactic ferment that in its form of spore, naturally encapsulated, allows it to withstand unfavorable environmental conditions.
Spores are resistant to gastric, biliary and intestinal juices, which instead inactivate other strains of fermentation Lactates in unspoiled form. Already in the stomach in about 2 hours, it gives birth to the germinative form, that is to the vital cells that can multiply and produce the substances useful for the welfare of the organism.

Lactobacilli ACIDOPHILUS is stable even in non-optimal conditions of storage. It is suitable for both acidic and alkaline conditions, and is able to overcome the acidity of the intestinal tract.
It can smoothly cross the stomach and intestines by adhering to their walls and proliferating, thus promoting the ideal environment for proper digestion and assimilation of food and preventing formation of flatulence.

LAMBOURG RHAMNOSUS is an anaerobic bacterium that produces lactic acid in the intestine, making it suitable for lactobacilli but inhospitable for pathogenic germs.
It helps those with digestive problems and is useful for urinary tract infections.

INULINA and FOS (Fruit Oligosaccharides) have been added, which are prebiotic substances that are not digested by the body but are only used by the bacteria for their development and metabolism required to colonize the intestines.

SACCHAROMYCES BOULARDII being a yeast, is not inactivated by antibiotics. It is also effective in preventing traveler's diarrhea (Kollaritsch et al., 1993; McFarland, 2007).
Some studies have shown that S. boulardii can also prevent intestinal infections caused by Escherichia coli and Candida albicans (Berg et al., 1993; Buts et al., 2006; Czerucka et al., 2000; Jawhara et al. Poulain, 2007).
An important feature of S. boulardii is to be stable under acidic pH conditions, allowing many yeast cells to survive in the stomach and reach the intestines in a short time (Edwards-Ingram et al., 2007). S. Boulardii has the ability to bind to the intestinal lumen to pathogenic organisms, particularly E. coli, forming aggregates that are easily excreted from the intestine. It is also capable of inactivating toxins A and B produced by the difficult clostridium responsible for 10-25% of cases of antibiotic-associated diarrhea. S. Boulardii also showed intestinal anti-inflammatory activity Like other probiotics, this yeast acts by secretion of proteases or inhibitory proteins, stimulation of immunoglobulin A, elimination of toxins and adherence to epithelial layers, creating a competition With pathogenic microorganisms for colonization sites (Czerucka et al., 2002; Fooks and Gibson, 2002; Ozkan et al., 2007).